AVAILABLE NOW IN PRINT AND EBOOK 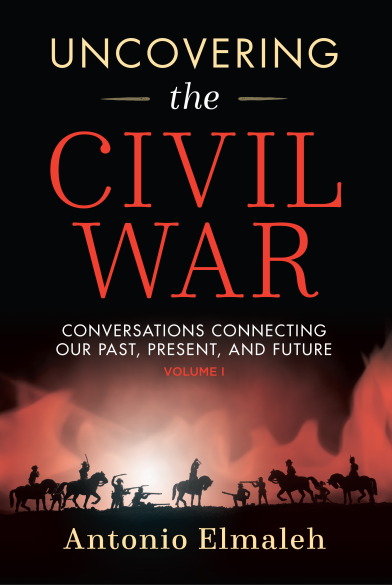 This two-volume set of transcripts from the podcast series of the same name, hosted by Antonio Elmaleh, the author of the acclaimed novel The Ones They Left Behind, brings to life interesting, little-known, or even unknown facts about the Civil War and Reconstruction.  The conversations illuminate how people, places, and events during the Civil War continue to impact our lives today.

Uncovering the Civil War is for anyone interested in American history and its effect on current events. Mr. Elmaleh and his distinguished guests share their knowledge and expertise about all things Civil War and Reconstructed-related – leaving readers feeling more connected to our past with a greater understanding of our present, and a new perspective on our future.  Volume 1 contains twelve transcripts covering many diverse topics ranging from The Second Great Awakening to the connection between banking and slavery to the role pornography played during the war to media coverage of the war to Edwin Stanton and many other topics in between.

Antonio Elmaleh has had careers in film production/distribution and real estate.  He has written memoirs, screenplays, and short stories.  He is the author of The Ones They Left Behind and A House United, and host of the podcast series Uncovering the Civil War upon which this book is based.  Mr. Elmaleh died in January 2020 following a long illness.